Over 71,000 users from around the world give us 4.8/5 stars
Home Audemars Piguet watches Royal Oak Offshore
We've found 2,268 results for “ 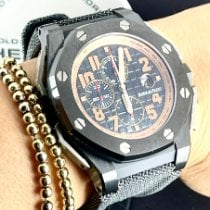 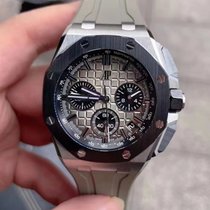 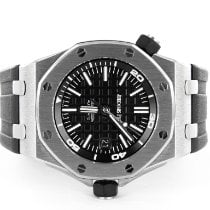 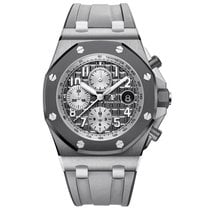 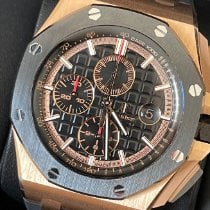 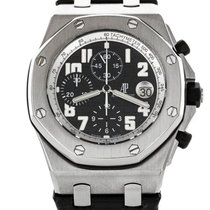 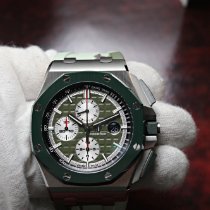 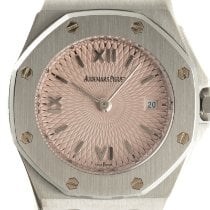 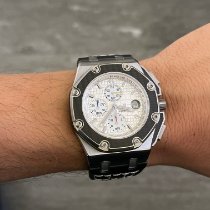 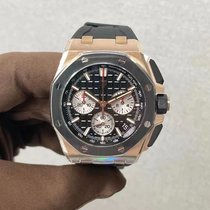 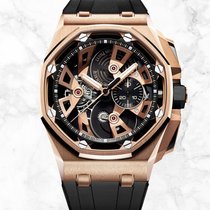 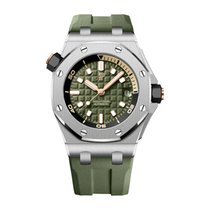 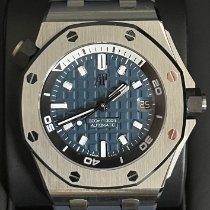 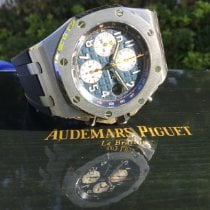 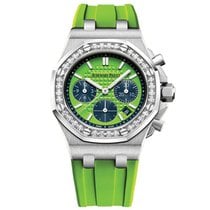 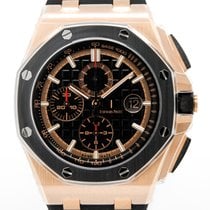 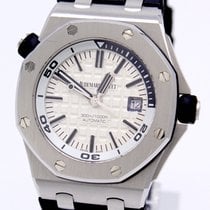 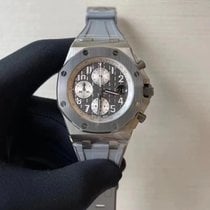 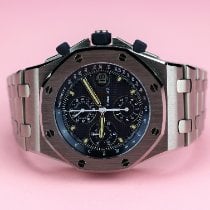 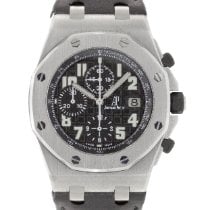 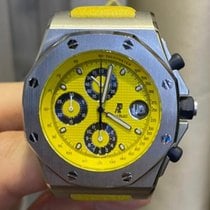 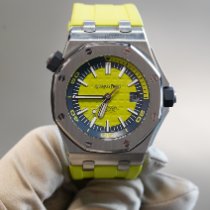 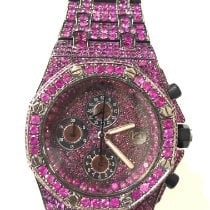 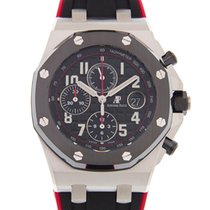 29
HK
Next
Save this search

A porthole design and massive case characterize the Royal Oak Offshore from Audemars Piguet. Top models combine high-tech materials like ceramic or titanium with classic functions, such as the perpetual calendar and minute repeater.

A Sporty Take on an Iconic Watch

It's worth remembering the roots of the Audemars Piguet Royal Oak Offshore. Its porthole design is a clear indicator of its relation to a true watch classic: the Royal Oak. Audemars Piguet brought the Offshore to market in 1993 as a sporty and masculine evolution of the Royal Oak. Even today, its most important design characteristics are its massive case, integrated band, and large, octagonal bezel with eight hexagonal screws. The "tapisserie" engraving on the dial is yet another defining feature of this luxury watch.

The Royal Oak Offshore currently comes in numerous variants: from diamond-studded women's pieces and diving watches to the complex Grande Complication. Most of the "standard models" feature a chronograph function for measuring periods of time, including the models from 2021. These latest editions come with a redesigned 43-mm case and the in-house caliber 4401 with a flyback function. Audemars Piguet had previously only used this movement in the Code 11.59 collection.

The Royal Oak Offshore Selfwinding Flying Tourbillon Flyback Chronograph is among the collection's top models. Introduced in 2021, this timepiece is 43-mm in diameter and has a reworked case design with larger polished surfaces on its edges. What's more, its case and chronograph push-pieces are curved. Inside the titanium case, you'll find the in-house caliber 2967. Audemars Piguet will only produce 100 copies of this model.

How much does the Royal Oak Offshore cost?

The Royal Oak Offshore "Bumblebee" gets its nickname from its black and yellow design. This mostly black carbon watch is 42 mm in diameter and features numerous yellow accents on its dial and band. You can purchase this model for around 27,000 USD.

The Royal Oak Offshore Chronograph 25th Anniversary ref. 26237ST.OO.1000ST.01 from 2018 with a blue "petite tapisserie" dial is a great collector's item. This watch pays homage to the very first Offshore from 1993. Blue rubber coats its pushers and screw-down crown, while both the bracelet and 42-mm case are made of stainless steel. To power this timepiece, the manufacturer has chosen the automatic caliber 3126/3840, based on the in-house caliber 3120, with a chronograph module.

A mint-condition 25th Anniversary Edition requires an investment of about 42,500 USD. Pre-owned versions demand only 4,900 USD less and, thus, exhibit fantastic value retention. This model's historical predecessor is the ref. 25721ST from the 1990s. A used watch will set you back roughly 33,000 USD. That price has increased rapidly recently, as the same timepiece demanded only 22,000 USD back in March 2020.

Prices for the Royal Oak Offshore in Gold

Audemars Piguet also offers the Royal Oak Offshore in precious metals like gold or platinum. One example of a platinum model is the ref. 26470PT.OO.1000PT.02. Only 25 copies of this rare chronograph exist. Its "méga tapisserie" dial is blue with a black edge, subdials, and hour markers. The 42-mm case is water-resistant to 100 m (10 bar, 328 ft), so this timepiece can easily join you for some laps in the pool. However, it's up to you whether or not you want to put a watch worth over 158,000 USD to the test underwater.

The white gold special-edition ref. 26473BC.ZZ.8043BC.01 is in a league of its own. A total of 484 baguette-cut diamonds adorn its case and bracelet, with a further 88 diamonds on the dial and 60 diamonds on the inner bezel. The final diamond count comes in at an impressive 632 gemstones, propelling this model's price well past the 1-million-dollar mark.

The three-hand edition of the Royal Oak Offshore Diver is available in a rainbow of dial colors, including turquoise, lime green, yellow, orange, and purple. Models from 2021 boast more muted tones like gray, blue, and olive green. Each watch comes with a 42-mm stainless steel case and is water-resistant to 300 m (30 bar, 984 ft). However, the latest versions feature the caliber 4308 with a 60-hour power reserve. AP (as fans call the brand) also outfits these timepieces with a new quick-change mechanism for its rubber straps. The manufacturer officially lists the 2021 Royal Oak Offshore Diver for 25,400 USD. Previous models use the caliber 3120 and sell for between 21,500 and 27,000 USD, depending on the condition.

Audemars Piguet used to produce the Royal Oak Offshore Diver with a chronograph function. These watches also come with brightly colored dials and straps in orange, blue, green, or yellow. The edition with a blue dial and rubber strap was limited to a run of 400 pieces and costs about 28,500 USD pre-owned. Only 375 copies exist of both the orange and yellow variants, which cost about the same as their blue sister model. At 39,000 USD, the green version is markedly more expensive, which is likely due to its limited production run of 50 pieces.

One thing shared by all Royal Oak Offshore Divers is the additional crown at 10 o'clock. You can use this crown to adjust the inner bezel, which serves the same role as a traditional unidirectional diving bezel.

Audemars Piguet treated the Royal Oak Offshore to a comprehensive update in 2021. The polished chamfering on the case's edges is now larger, and the 43-mm case is 1 mm smaller than the previous edition. The manufacturer has also introduced a quick-change system for the bands. Another major change is the in-house caliber 4401, which AP previously only used in the Code 11.59 collection. This movement boasts a 70-hour power reserve and a flyback chronograph function.

AP offers the 2021 Royal Oak Offshore in stainless steel, titanium, and rose gold. Most models feature a black ceramic bezel. The one exception is the titanium ref. 26420TI.OO.A027CA.01, which comes with a titanium bezel. This watch has a blue dial and rubber strap and a list price of 36,200 USD. The version with a ceramic bezel and gray dial and strap officially sells for 37,500 USD. The two stainless steel editions cost the exact same. Finally, the rose gold model is the most expensive, with a recommended retail price of 56,000 USD.

The most impressive watches of the Royal Oak Offshore collection are the Grande Complication and Tourbillon Chronograph. Audemars Piguet produces the former in white or black ceramic. Both versions are 44 mm in diameter and feature a sapphire crystal dial that provides a clear view of the movement within. The automatic in-house caliber 2885 provides the timepiece with a perpetual calendar, minute repeater, and split-seconds chronograph. Back in 2018, both versions had a list price of 725,000 USD.

The various Royal Oak Offshore Tourbillon Chronograph models are a bit more affordable. The most recent edition is the ref. 26622TI.GG.D002CA.01, which is limited to a run of 100 pieces. Its 43-mm case is made of sandblasted titanium and contains the in-house caliber 2967. You can view this movement at work through the skeletonized dial and sapphire crystal case back. It provides the watch with an automatic winding rotor and a 65-hour power reserve. Other impressive details include the flying tourbillon at 6 o'clock and the flyback chronograph. You will likely have to wait a while to get your hands on one of these timepieces, as they first went on sale exclusively at AP boutiques in mid-2021.

If you're looking to get your watch more quickly, you may prefer the Royal Oak Offshore Tourbillon Chronograph Openworked ref. 26348IO.OO.A002CA.01. This hand-skeletonized masterpiece is dedicated to Qatari watch dealer Ali Bin Ali. Its 44-mm case comes in titanium, while the bezel, pushers, and crown are all black ceramic. The in-house caliber 2936 with a 72-hour power reserve ticks away inside this timepiece, and you can view the movement from above and below. Unlike the 2021 edition, the ref. 26348IO has a bridge running across its tourbillon. You can call this beautiful creation your own for around 183,000 USD.

Other Royal Oak Offshore Tourbillon watches include the refs. 26421ST.OO.A002CA.01 (stainless steel) and 26421OR.OO.A002CA.01 (rose gold). Audemars Piguet has limited both versions to runs of 50 pieces. These timepieces debuted in 2018 in celebration of the Royal Oak Offshore's 25th anniversary. According to the manufacturer, the avant-garde, skeletonized movement takes its cues from modern architecture. The manual caliber powering these watches has a maximum power reserve of 173 hours, which is just over seven days. You can purchase a never-worn edition for around 402,000 USD in stainless steel and 438,000 USD in rose gold.

Audemars Piguet regularly releases special editions of the Royal Oak Offshore. One such timepiece is the Royal Oak Offshore Michael Schumacher, dedicated to one of Formula 1's most celebrated drivers of all time. This watch comes in titanium, rose gold, or platinum. Each version is strictly limited: The titanium edition is limited to 1,000 pieces, the rose gold to 500, and the platinum to only 100. The platinum version is the most expensive, with a pre-owned price of over 122,000 USD. The gold variants come in at around 106,000 USD pre-owned. At about 67,000 USD, the titanium model is the most affordable.

Audemars Piguet has also developed a limited-edition Offshore for Rubens Barrichello – Schumacher's former Ferrari teammate. There are a few versions of this model as well. The titanium edition is limited to a run of 1,000 pieces and costs about 40,000 USD used. The rose gold version is even rarer, with a run of only 500 copies. Be sure to set aside around 70,500 USD for this timepiece. Limited to 150 pieces, the platinum model demands over 81,500 USD in excellent condition.

Arnold Schwarzenegger is yet another celebrity with several limited edition Audemars Piguet Royal Oak Offshore models in his honor. Two examples are the T3 and the End of Days. The latter is limited to 500 pieces and costs about 31,500 USD used. On the other hand, you can purchase one of the 1,000 copies of the T3 for around 29,000 USD. A third watch, the Audemars Piguet Royal Oak Offshore Arnold Schwarzenegger The Legacy, is limited to 1,500 pieces and demands around 34,000 USD pre-owned.