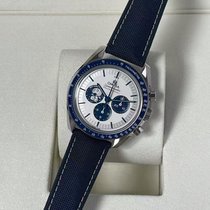 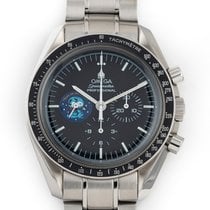 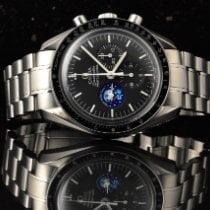 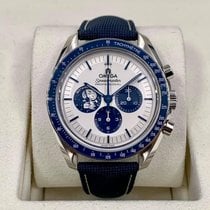 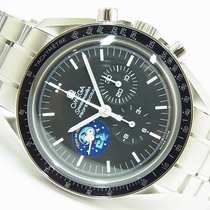 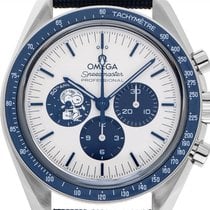 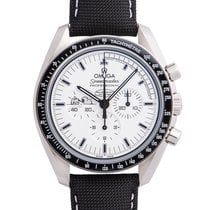 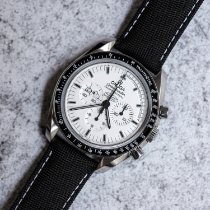 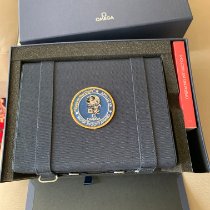 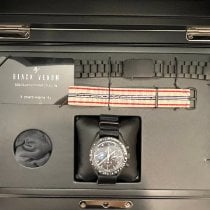 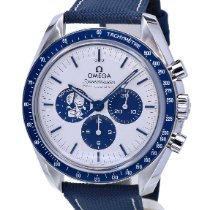 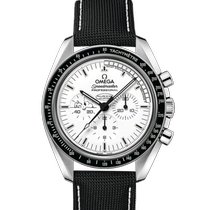 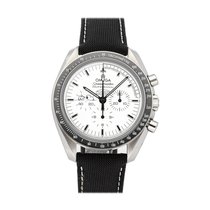 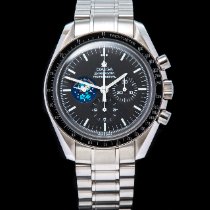 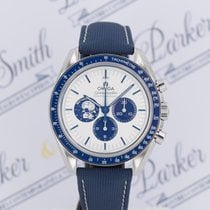 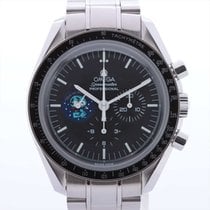 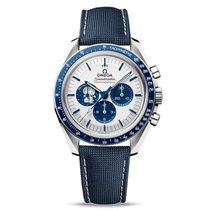 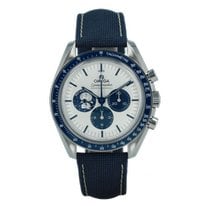 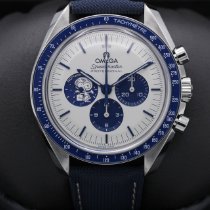 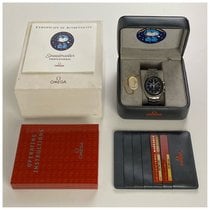 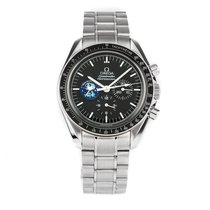 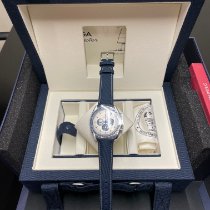 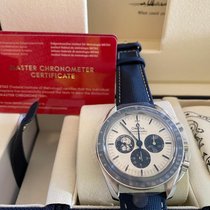 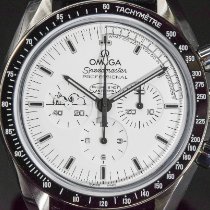 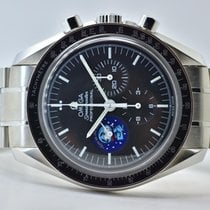 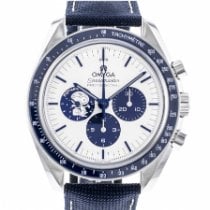 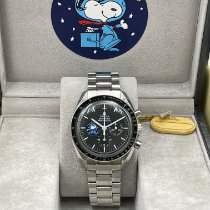 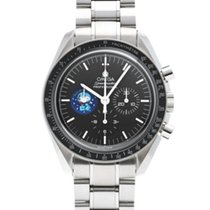 Omega Snoopy: A Watch That's Out of This World

The Omega Speedmaster Professional proudly claims the most unique honor ever bestowed upon a watch: NASA's Silver Snoopy award. To date, the manufacturer has released three special-edition models in honor of 1970's Apollo 13 mission.

The Omega Speedmaster Professional needed only 14 seconds to make its mark on history. That's how long it took the astronauts of the Apollo 13 mission to right the course of their damaged spacecraft back toward Earth in the spring of 1970. The crew members timed those vital 14 seconds using a Speedmaster Professional, NASA's official watch. The lives of the three men on board depended on the watch working perfectly. Otherwise, they would have missed Earth by about 37,000 miles (60,000 km) and been lost in space. Thankfully, the mission came to a happy ending when the crew safely splashed down in the Pacific Ocean on April 17, 1970.

NASA thanked Omega for the Speedmaster Professional's outstanding performance by awarding it with the Silver Snoopy award, NASA's highest honor. It's usually awarded to NASA employees for outstanding achievements or contributions relating to flight safety or missions. The prize is a sterling Silver Snoopy lapel pin showing Snoopy as an astronaut. Snoopy is NASA's mascot, and Peanuts creator Charles M. Schulz personally designed the prize.

As of 2020, Omega has released three special-edition Speedmaster Professionals that pay homage to the dramatic events of April 1970. The first Speedmaster Snoopy debuted in 2003 and had a limited production run of only 5,441 pieces. Today this timepiece is a coveted collector's item with the potential to appreciate. By late 2020, it was selling for more than 12,000 USD. The next model followed in 2015 and has experienced exploding prices. Limited to a run of 1,970 pieces, it went from an official list price of 7,350 USD at release to a market value of nearly 41,500 USD by late 2020. That's an increase of over 550%.

On October 5, 2020, Omega celebrated the 50 years since it received the Silver Snoopy Award with the introduction of the Speedmaster Silver Snoopy Award 50th Anniversary. This watch is in regular series production and uses the Co-Axial Master Chronometer caliber 3861. Thanks to its new technology, this model had a higher list price of 9,600 USD.

Reasons to Buy an Omega Snoopy

Prices at a Glance: Omega Snoopy

How much does an Omega Snoopy from 2015 cost?

Omega presented the ref. 311.32.42.30.04.003 at Baselworld 2015, 45 years after the Apollo 13 mission. Thanks to its white dial, this watch stands out from the rest of the Speedmaster Professional collection and the earlier Snoopy model, which all have dark dials.

The watch boasts a few extras, too, such as a resting Snoopy on the small seconds subdial at 9 o'clock. While not obvious during the daytime, a coating of luminous material means this little beagle glows in the dark. Furthermore, the first 14 seconds on the dial each have a frame resembling a comic strip panel with the inscription "What could you do in 14 seconds?" beneath them, a reference to those critical seconds on board Apollo 13. A quote from former NASA flight director Gene Kranz above the axis of the hands is what Snoopy is thinking: "Failure is not an option!"

However, the 2015 Silver Snoopy saves its main attraction for its case back, where you'll find a sterling silver medallion with Snoopy as an astronaut – a reproduction of the actual award. It features Snoopy floating on a dark blue enamel background meant to represent the cosmos. Each watch is unique, as the silver powder used to make Snoopy is applied by hand. The total production run was limited to 1,970 copies in a nod to the year of the Apollo 13 mission.

The attention to detail and limited supply have caused prices for this watch to soar. In 2020, never-worn examples were demanding up to 41,500 USD. You can save about 8,000 USD by purchasing a pre-owned version instead. For comparison, you could have purchased the same mint-condition watch back in late 2018 for only 23,000 USD. This model's fantastic performance shows no sign of stopping.

Back in 2003, Omega released their first timepiece bearing the image of the beloved canine. This Snoopy watch, the ref. 3578.51.00, more closely resembles the standard Moonwatch due to its black dial. On the front, you'll find that Snoopy has donned a spacesuit and taken up residence on the small seconds dial. The Snoopy Award motif is composed of two shades of blue, as well as red and white. The case back features the same imagery but in a larger format. Its colorful design makes this 2003 Speedmaster "Snoopy" a true feast for the eyes. Collectors are especially fond of this model. You should plan on spending about 13,000 USD on a well-maintained example. A used watch will set you back roughly 12,000 USD.

The ref. 310.32.42.50.02.001 from 2020 shares its 42-mm stainless steel case with the standard-edition Moonwatch. It features a silver dial with blue PVD-coated hour markers. Omega also uses this blue tone for the subdials, ceramic bezel, central hands, and nylon strap. Only the chronograph subdials at 3 and 6 o'clock have white hands.

Of course, this wouldn't be a Snoopy watch without the beloved beagle. You can find him in a spacesuit happily floating through the universe on the subdial at 9 o'clock. The subdial also features the inscription "50th Anniversary" arcing above Snoopy's head.

However, the watch's true highlight appears on the reverse side. Omega equips this model with a NAIAD LOCK case back. This unique locking system enables the manufacturer to position the screw-down case back so that all engravings and other elements are always in their proper positions. This mechanism is extremely secure; however, the Silver Snoopy has a depth rating of only 50 m (5 bar, 164 ft). The far side of the Moon dominates the foreground of the case back. Snoopy also appears flying in his Command and Service Module (CSM) on a so-called "magical hand," which rotates when the chronograph function is activated. Finally, the Earth sits in the background and completes one rotation per minute.

The Snoopy variants share many significant details with the standard Omega Speedmaster Professional. They all have stainless steel cases that measure 42 mm in diameter. The two limited editions use the manual caliber 1861 with a 48-hour power reserve. This movement has remained almost unchanged since the late 1960s and is based on a caliber from Lemania. ​ The 2020 model features an updated version of the 1861 known as the 3861. This movement boasts Omega's co-axial escapement and a silicon hairspring. It also comes with Master Chronometer certification from the Swiss Federal Institute of Metrology (METAS), which means it is especially precise and resistant to magnetic fields of up to 15,000 gauss.

The Speedmaster Professional is famous not only for its use on the Apollo 13 mission but also for accompanying the first astronauts to land on the Moon on July 20, 1969. Beforehand, NASA had tested many mechanical watches from different brands. The Speedmaster performed the best, withstanding extreme temperatures, vibrations, increases in velocity, and other harsh conditions.

While the original Moonwatch used Hesalite (plexiglass) since it doesn't splinter, the Snoopy models feature scratch-resistant sapphire crystal. Originally, Omega designed the Speedmaster to determine speeds during car races. In this way, it's comparable to the Rolex Daytona. These watches are two of the most renowned chronographs in the world.